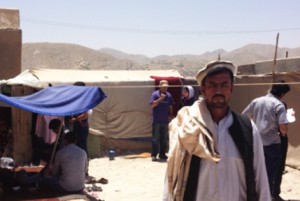 The media group, Moby Group, one of the largest in Afghanistan, launched through its channel Tolo TV, the first series full HD, Defenders, produced by Kaboora Productions, which is part of the group, and has great presence in Iran, Pakistan and Yemen.

Under the production of Daniel Mesa, who previously worked for Fox Telecolombia, the 13-episode series maintains respect for the customs of Western culture, where many restrictions against women inclusively there is no acting profession as actress.

“It was very a difficult job for the small budget and the kind of social barriers due to the restrictions they have for women. This is to be applauded because it is a great step to be able to produce the first TV series in Afghanistan, where it is shown for the first time, the equality of conditions for women and men. Tolo TV is a channel that has brought and adapted formats such as The Voice and Minute to Win, among others. Defenders is its big bet on fiction with which they are doing their part to grow local production,” said Daniel Mesa, series producer.

Significantly lDefenders was the most watched program in this country for several weeks, in addition to a huge acceptance across Tolo TV channel on YouTube.