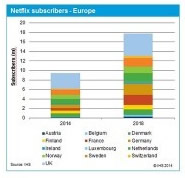 The thorough investigation of IHS Global Technology provides that the expansion in Europe would determine the growth of the international customer base of Netflix, a company that, by 2018, would have eight million new European subscribers. Later this year the platform plans to launch its service in Belgium, France, Luxembourg, Austria, Switzerland and Germany, which will add between five and six million new subscribers. In this manner, it is estimated that independent OTT video services will grow on average by 18% annually over the next five years. The launch of Netflix in the region will boost the online subscription market in Western Europe to 35% annual growth, with Germany as the second OTT market in Europe behind the UK. In the international markets, the cost to Netflix (based primarily on content acquisition and streaming costs) reached US $ 267 million in the second quarter of this year, equivalent to an average of US $ 6.71 per month per subscriber. IHS estimates that the additional costs that are incurred from six new markets where the platform will enter would total between $ 30 million and $ 35 million. Succulent figures, don’t you think?