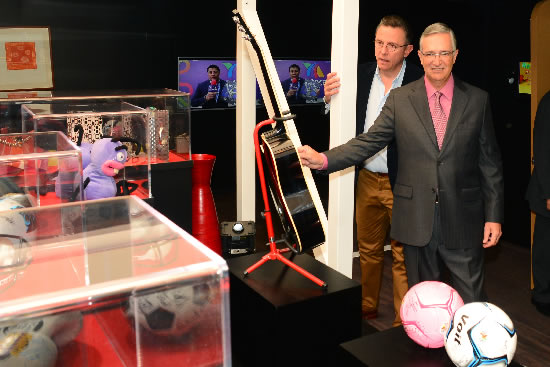 The month of December has been very fun for Ricardo B. Salinas Pliego, Chairman of Grupo Salinas and owner of TV Azteca. As with Jorge Garralda, director of A Quien Corresponda, they toured the areas that were conditioned in Azteca in Mexico, for the public to donate a toy for the Jugueton 2014.
Ricardo Salinas Pliego stated that in Mexico there are more good things than bad and proof of this is the campaign that has provoked many smiles. “There are many children waiting for a toy next January 6, the Epihany of the Magi, and they will have it.”
The President of Salinas Group, acknowledged the great work of Jorge Garralda and his team, who made this campaign to collect toys, but thanked the public who donates to bring happiness to those who have less.
The first station they visited was the container where is La Casa Volteada, a spectacular house where everything is upside down. In this space, actors, singers and conductors of the channel
attend every day to support and encourage the public to donate new toys.
They visited “La Villa Jugueton“, hence the public, by donating a toy, have fun with their children and participate in various activities such as the track electric carts, the area of the hit show “La Isla”, a prepared space so that children and adults compete and demonstrate their skills in each game; there is an area dedicated to the program “El Hormiguero MX”, and another dedicated to “Mexico Tiene Talento,” among others. There is also a gallery with many items donated by celebrities and are auctioned. The money raised will be used to purchase toys.
Jorge Garralda and a great team of collaborators are reinvented every year in order to get more toys
and to pass off a good time for families arriving with enthusiasm to the Azteca facilities, convinced that their donation will reach the hands of a child with limited resources.
Jugueton is the world’s largest toy donation campaign having managed to distribute 155,800,000
smiles in Mexico, USA, Guatemala, Honduras and El Salvador.