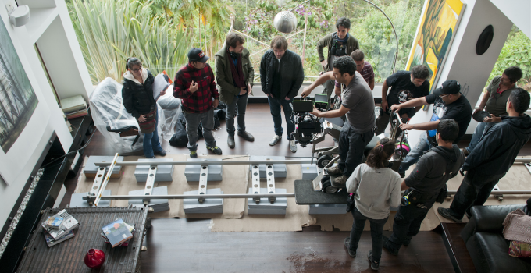 Thanks to the stimulus of return 40% – 20% of the Act 1556 of 2012, during 2014 seven projects from the United States, Argentina and Spain were filmed in the country.
Among them, Zambo Dende, of director Ricardo Gabrielli with producer 7GLab Colombia Branch and production services Fox Telecolombia.
The cast is made up MarkoZaror, Michelle Lee and DarrenShahlaviy, discusses the new world of the XIV century.
A small step slave camp is lit by dazzling flashes of a full moon that serves as witness to what appears to be another ordinary night. Four guards held an apparent victory without realizing that within a few hours the dirty intentions of one of them, will unleash the wrath of equanimity, with African ballads will invoke the presence of liberating spectrum, who will handle the call of those oppressed who cry for equality.

Narcos, a Netflix film directed by Jose Padilha and Guillermo Navarro, produced by Gaumont International Television, with production services in Colombia of Dynamo, filmed in Bogotá, Cartagena and Medellin. Cast composed of Wagner Moura, Boyd Holbrook and Pedro Pascal.
This telefilm is a story based on true events about the growth and spread of drug cartels around the world and the best efforts of governments, like the U.S. and Colombia, to combat this scourge.

Everything started when she throws her cell after having a heated argument with her ex-husband and Sanabria decides to retrieve it and call to return it. During the conversation both characters feel great empathy and make a date in a cafe. Upon seeing themselves, Juana meets a man whom she did not expect and from that moment must overcome the prejudices of society and herself to surrender to love.