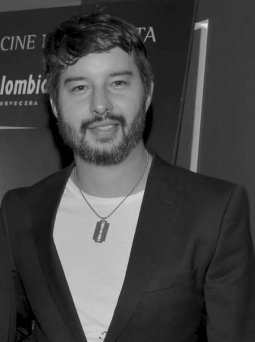 Screenwriter, director and producer who directed this year Zambo Dende, the story of a Latin America superhero of the 14th century, which was produced by 7GLab in the studios of Fox Telecolombia, in Bogota.
Speaks English, Spanish, German and Italian, studied at the University of California, times in which he wrote, acted and directed many of his own short films.
His professional career began in the US circuit performance, without separating from Colombia. Thus, participated in the art department of “El último carnaval” (1998) of Ernesto McCausland; and in different positions in series and films like “Undressed” of MTV (1999), “Blow” (2001), “Windtalkers” (2002) and “Coronado” (2003).
He returned to Colombia to writing, acting, directing, producing and editing his first feature film “Cuando rompen las olas” (2006). Also made short films “Algo” (2006), and “Anillo de compromiso” (2006), stories in which acted, and was also a screenwriter, producer, editor and director.
With his debut film, traveled to different festival circuits and international exhibitions, after which was contacted to present a casting of Directors for Fox Telecolombia, company with which ventured into the realization of TV series taking film language guidelines to television. With this production house he directed 15 episodes of the series “Tiempo Final” (2007-2009); 10 episodes of the series “Sin Retorno” (2008-2009), and “El Capo” (2009).
In 2009, he directed the series “Kdabra”, in its third season; subsequently “Mentes en Shock” (2011); “La Mariposa” (2011); the pilot and several episodes of the series “Lynch” (2012), series broadcast through Moviecity; the second part of the series “El Capo”. Also, he directed the telefilms “La Beca” (2007), “Los Fantasmas de DAS” (2007), and “La Pocima” (2008), for RCN.
His most recent works are the directing of the successful
“Cumbia Ninja” (2013) and “Cumbia Ninja 2” (2014). Culminating this 2014 with Zambo Dende.