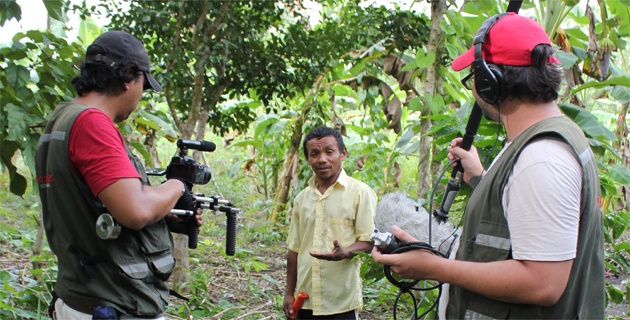 The camera crew of Pimenton Rojo, while taking pictures of support for a documentary

Pimenton Rojo (Red Paprika) from Barranquilla the audiovisual collective prepares for the premiere of the documentary about the 60 years of Colombian television to be aired this coming February, 8 by Telecaribe in Colombia.

A journey through the history of the small screen, in this beautiful area of the Caribbean Basin, from its inception, when they were independent programmers and the birth of Telecaribe one of the regional channels of greater importance in Colombia.

In a press release, the audiovisual collective highlights that in the work “manages to capture not only the history of Telecaribe channel, but also the history of those movements and independent producers and programmers.”

These enterprises interested to venture into the world of television – adds the communique – established alliances “with ham radio operators, visionaries and entrepreneurs of the time, which gave the Colombian Caribbean the great possibility to write their own story for the rest of the country and the world.”

The documentary includes the unforgettable moments that were transmitted by the regional television, as when baseball player Edgar Renteria connected the so-called ‘golden hit’ that gave the Florida Marlins the victory in the World Series, at the end of the 90s decade.

This proposal is part of a series of documentaries that the Autoridad Nacional de Television – ANTV (the National Television Authority) decided to finance to celebrate six decades of the birth of television in Colombia.

Production Companies and audiovisual groups across the country joined the call of ANTV. The works will be broadcast on regional channels.

For Julio Oyaga Martinez, director of the documentary realized by Pimenton Rojo, reflects the fact of “celebrating the event of the birthday of Colombian TV. We decided to tackle this issue from the perspective of the Caribbean region.”

Oyaga Martinez also highlights the importance of the call made by the National Television Authority in telling the story of TV from the regions.

“Herein are also linked regional channels as Telecaribe, Telepacifico and Teleantioquia” said that the audiovisual collective Pimenton Rojo was born as a university project since 2005 and in 2008 met the requirements to work alongside with regional channels, in this case with Telecaribe.

Since that time, Pimenton Rojo got fully into the project  to show from the audiovisual format the cultural diversity of the Caribbean region.

This has earned him 16 distinctions, highlighting one of the UNESCO.

Is also an organization with a sense of social responsibility. On his website he is described as “a nonprofit organization dedicated to improving the quality of life of vulnerable populations through artistic, cultural and TIC (Tecnologias de la Informacion y la Comunicación) projects.”