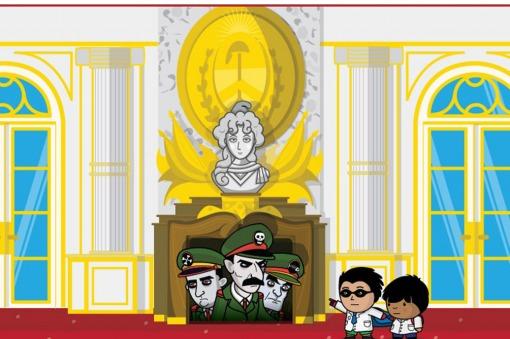 The animated series The amazing tour of Zamba, of Pakapaka, the children’s channel of the Ministry of Education, of Argentina, received this important nomination for the chapter “The Amazing Excursion of Zamba in the Pink House.”

Produced by Pakapaka broadcast by the children’s channel and Public TV and realized by producer El perro en la Luna, the chapter was nominated in the category “Children’s Entertainment” in one of the major events that delivers the global television industry, the International Kids Emmy Awards. In the category besides compete the productions Les As De La Jungle A La  Rescousse (The Jungle Bunch to the Rescue), France; Burka Avenger, Pakistan; andStrange Hill High, UK.

The series is starring Zamba, a kid of Clorinda, province of Formosa, who travels back in time to learn and explore different times and events of his country accompanied by great figures of history.

In the specially nominated chapter, Zamba visits recent history to learn about the causes and events of the civil-military dictatorship that took place in Argentina between 1976 and 1983. Along with girl and boy  who Know Everything, they get to know the members of the Military Junta, the causes and consequences of the dictatorship and the return to democracy.