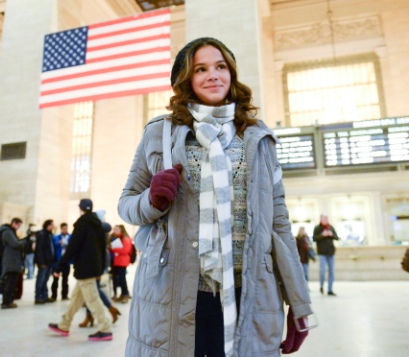 Globo chose New York City as the background for the opening scenes of its upcoming 7 pm-slot telenovela I Love Paraisópolis. Amidst a romantic comedy atmosphere, the telenovela is set in São Paulo, but the story of Marizete (Bruna Marquezine, ‘Helena’s Shadow’) and Danda (Tatá Werneck, ‘Trail of Lies’) begins in the Big Apple. The two young girls are best friends who live in the bustling Paraisópolis, one of São Paulo’s largest communities, with around 100,000 residents in an area of one million square meters. Marizete and Danda travel together to the U.S. to pursue their dreams. They live countless adventures and face a few familiar problems that seem to follow them wherever they go. The telenovela is scheduled to premiere in May.

Used to the tropical heat, Globo’s crew faced in New York freezing temperatures of – 11 Celsius degree to shoot the mishaps of Marizete and Danda. During the eleven days of shooting in Manhattan, the crew covered several of the city’s milestones, such as Grand Central, Washington Square, Central Park, Times Square, Gantry Plaza, Queens, and the Highline. The cold weather also set the atmosphere for the first romantic scenes between Marizete and Benjamin (Maurício Destri, ‘The Enchanted Tale’). Around 50 people and approximately 120 local extras, including Brazilians and Americans, were used in the scenes. The crew took ten costume suitcases, seven art production trunks and two characterization trunks from Brazil to shoot the U.S. scenes.

Before finally settling in Globo’s studios in Rio de Janeiro, the telenovela crew visited Paraisópolis. Over 100 professionals worked in São Paulo for nearly two weeks. The crew shot scenes in the Paraisópolis community and other traditional São Paulo spots, such as the Morumbi district and 25 de Março Street.

The cast of I Love Paraisópolis’also features Henri Castelli (‘Caribbean Flower’), Letícia Spiller (‘Precious Pearl’), and Caio Castro (‘Trail of Lies’), among others.