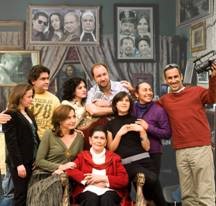 In August, Channel 22 international cultural channel of Mexico in the United States, pays tribute to one of the most emblematic dynasties in the history of Mexican cinema: Los Bracho, three generations of actors, actresses and directors that have marked the film industry in Mexico for more than 70 years. Corazon de Niño (Heart of a child), directed by Julio Bracho. With: Ignacio Lopez Tarso, Eduardo Fuentes, Adam R. Solis, Arturo Alvarez Lemon and Rene Azcoitia. Based on the novel Corazon: diario de un niño (Heart: Diary of a Child,) by Edmundo de Amicis, this film narrates the story of Professor Almeyeda, who returns to the town of Taxco where he was born to replace the recently deceased Professor Mendez. This is the beginning of the close and affectionate approach with the innocence of children of the Mexican province.

Guadalajara en Verano (Guadalajara in Summer) (1965); Director: Julio Bracho; With: Elizabeth Campbell, Xavier Loya, Alicia Bonet and Claudio Brook. A woman experiences with music, joy and the color of the beautiful city of Guadalajara. A modern city with a presumed historical background, in which the most representative essences of Mexicanity shines.

El viaje de Nonna (Nonna’s Journey) (2007); Director: Sebastian Gaetano Silva. With: Ana Ofelia Murguia, Julio Bracho Castillo, Martin Altomaro, Ximena González-Rubio and Cecilia Suarez. To “Nonna” the grandmother of the Todaros’, she forgets everything but who wants to go to the land of her beloved and deceased husband: Italy. Cornered by the insistence of “Nonna” and wanting to give her one last pleasure the family decides to concede her longed trip. Thus, all embark on an adventure in search of images for the grandmother’s memory; a trip full of twists and surprises inherent in the situation, but above all of love.

Doña Perfecta (1950) Director: Alejandro Galindo. Con: Dolores del Río, Esther Fernandez, Carlos Navarro, Julio Villarreal, José Elias Moreno y Natalia Ortiz. The arrival of Pepe, a young liberal agronomist, to the town of Santa Fe provokes the hostility of neighboring conservatives of the place. Pepe is staying with his aunt Perfecta, a Puritan lady who does not share the view of her nephew; however, when the love between him and his cousin Rosario emerges, Doña Perfecta will be forced to take drastic measures to avoid it.

With the transmission of the Ciclo: Dinastia Bracho (Cycle: Bracho Dynasty); Channel 22 International seeks to be faithful to their mission of disseminating the best artistic and cultural expressions of Mexico and the world, produce television of the highest quality, collaborate in the creation of audiences for the arts and foster a critical view of reality. (www.canal22Internacional.org.mx)