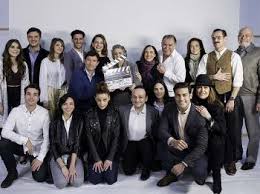 It is the new production of Roberto Gomez Fernandez, whose characteristics and structures located as a mix of series and telenovela.

Before starting work on the forum, those incharge of production and cast gathered to celebrate a Mass for the beginning of the recordings of this new production.

During the homily, Roberto Gomez took the floor and, alluding to the words of the religious Minister said that in addition to invite to this project to tolerance and patience, above all should summon gratitude, and this is for having the opportunity to be part of a project like this.

The people who participate, the producer added, “was chosen for their talent and also because they are people in full swing, who enjoy their work and perform with gusto and great professionalism.”

After the Mass, the traditional clapboard was performed, which formally initiated the recordings of the series-telenovela to be released in January 2016 by Univision.