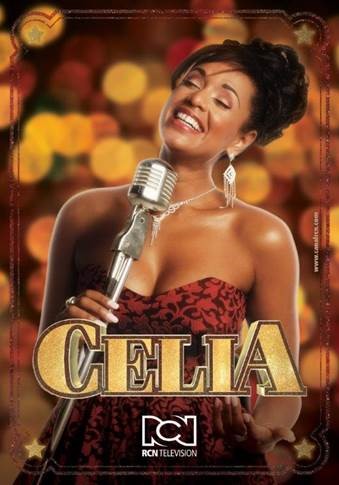 RCN Television is innovating. Of the hand of FOX Telecolombia ventured into a super-production called ‘Celia‘. A series based on the life of one of the most successful and beloved Latin artists of the last century: Celia Cruz, also known as “The Guarachera of Cuba” or “The Queen of Salsa.”

Was recorded with the highest quality standards, in locations such as Paramount Studios in Los Angeles, New York, San Juan of Puerto Rico and Colombia. It is a tribute to the life and legacy of this black woman, of rhythmic hips, brightly colored dresses and wigs which never went unnoticed and with her powerful voice, immortalized the phrase ¡Azúcar! (Sugar!)

The series of 80 chapters has in direction actor and director Victor Mallarino and Liliana Bocanegra. Libretti of Andres Salgado (Joe, The Legend) and Paul Rodriguez. The executive producer is Nelson Martinez, casting manager Juan Pablo Rincon, music Alfredo De La Fe, and the voice of Celia by Patricia Padilla.

‘Celia‘ in her young stage is played by Puerto Rican Jeimy Osorio, a young actress who has starred in films from Hollywood as Fast & Furious 5 in 2011. She also was a model of one of the music videos of Ricky Martin entitled ‘Mas‘, and has performed in several Telemundo novelas as: La Historia de tu Vida and Porque el Amor Manda, among others. And Cuban Aymée Nuviola is Celia as adult.

Aymée, it is also known as La Sonera del Mundo (The Sonera of the World), was nominated for the 2010 Billboard awards and in 2014 was nominated for a Latin Grammy for Best Salsa Album and Best Tropical Album with her album First Class to Havana.