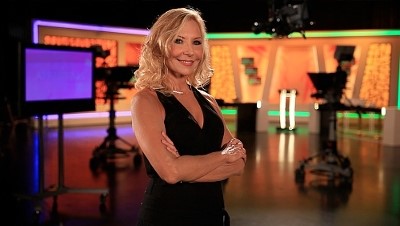 Spanish presenter enthusiastically celebrates the tenth anniversary of ARREBATADOS forming part of the family of América TeVé, a successful channel in Miami.

“ARREBATADOS, was my salvation.” After my father died I could not face the cameras. I left a contract for 5 years in Los Angeles because of my pain. ARREBATADOS gave me oxygen, it allowed me to breathe again. America TeVé opened their arms, and every person who worked in the show gave me love and faith to move forward. Those who did not, made me stronger. ARREBATADOS gave me happiness to reconnect with my roots and that beautiful country of my parents that I did not know. America TeVé gave me hand and took me out of the hollow which I was in”… claimed Maria.

Maria was news headline for 6 years with Enrique Gratas. She was news anchor of both 6 and 11 pm news on Telemundo. Produced, conducted and wrote for KVEA on weekends, Channel 52 Telemundo Los Angeles. Produced and hosted the first talk show in USA, Cara a Cara, broadcast by Radio TVE Europe, the Middle East and North Africa. Her talk show Maria Laria, international productions performed in Argentina, Mexico, Puerto Rico, Dominican Republic, Spain, Italy and France. Maria in her career, has interviewed 7 heads of state in function including George Bush and Pope John Paul II. She was Maria Elena Salinas replacement as anchor in KMEX in Los Angeles.