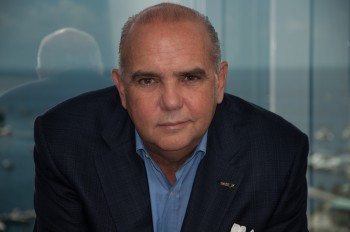 ViendoMovies (www.viendomovies.com), the iconic pay TV channel owned and distributed by SomosTV LLC, celebrates this month its 10th anniversary. ViendoMovies shares with its audience in the United States and Puerto Rico films produced in Spanish, 24hrs a day, with no commercial breaks. Its catalogue features movies from all genres and all Spanish speaking countries including Mexico, Puerto Rico, Peru, Colombia, Chile, Argentina, and Spain among others. As of today, substantially all major cable, satellite and telecommunications companies deliver ViendoMovies to its growing Latino subscribers.

ViendoMovies aired for the first time on September 5, 2006, immediately becoming an attractive option for the Spanish Speaking public and for the Spanish language packages offered on pay television. With a premium on-air look, the channel gave at the time a presence to a significant number of high budget, theatrical contemporary films not available at any entertainment option. ViendoMovies brings to its audience around 200 films per month and no less than 120 new releases per year, all exclusive, offering a continuously fresh look, with fewer repetitions. Moreover, the signal includes a robust on-demand package, to satisfy different viewing habits.
Luis Villanueva, SomosTV’s President and CEO, stated: “[w]e are elated as we celebrate the first decade of our flagship product — ViendoMovies.  We compete and regularly surpass the quality offered by the best-known Spanish movie products in the most sophisticated market in the world. The channel’s is produced entirely in high definition, with two satellite “feeds” that cover both coasts. We bring coverage to our audience of substantially all the major film festivals and markets featuring Spanish cinema and we take joy in providing our audience with the best movie channel in Spanish. We help as well in promoting Latino’s artistic and technical talent, supporting this way the country’s cultural diversity.
ViendoMovies programs, in a continuously updated graphic package, films that narrate urban stories, starred by some of the best and well-known talent that has impacted the movie industry recently. The channel includes “close caption” services in English and Spanish, to serve the bilingual audience and independent film lovers. ViendoMovies is marketed by a dedicated team in the most prominent social networks such as Facebook, Twitter, Instagram, YouTube and others, keeping the audience aware of the latest channel’s news. Recently ViendoMovies changed its on air presence and relaunched its website.