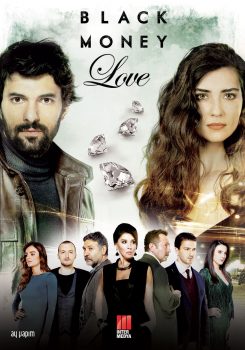 Inter Medya announced today that they closed an agreement for BLACK MONEY LOVE (KARA PARA ASK) with Spain’s Atresmedia. The series will go on air on one of Atresmedia’s channels.

Produced by Ay Yapim, which is behind popular series such as ENDLESS LOVE and THE PIT, BLACK MONEY LOVE features a strong cast including Tuba Buyukustun and Engin Akyurek, who was nominated in the Best Performance by an Actor award at the International Emmy Awards in 2015.

Can Okan, Founder and CEO of Inter Medya, said “Following the success of Turkish series in more than 130 countries, this is a very important step for us as we bring Turkish content into the European market. This deal makes us stronger in the business and we can guarantee that further sales will follow in this region.”

BLACK MONEY LOVE tells the story of the young police officer Omer Demir and the beautiful jewelry designer Elif Denizer, who have to work together in order to find the people behind the mysterious murders of his fiancé and her father, both bodies found together in strange circumstances in a car accident with a bullet in their heads.