The Chamber of Producers and Programmers of Audiovisual Signals (CAPPSA) presented, their Conferences in which executives of the main signals associated with the Chamber exposed on current issues in the industry. 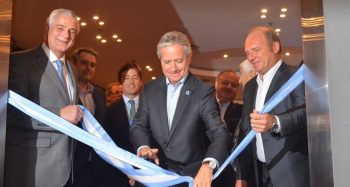 Andrés Perdiguero explained that “As content producers we think of an evolution of our products to accompany the user. NICKELODEON and NICK JR. have been growing uninterruptedly in the last 5 years based on knowing the niche of children and young people. He mentioned star programs such as Ninja Turtles and Bob Sponge or Paw Patrol as well as new productions such as Nella and Butterbean’s Café, the first content that brings the world of cooking and confectionery to the youngest ones.”

Ignacio Legeren said that MTV always defies the limits and showed the evolution of the channel from its birth always directed to the young, irreverent public. In production he said that “Caniggia Libre”, number 1 in audience of 18 to 24 years old, who returns soon and all the local content production for MTV Unplugged.”

Fernando Fratantoni presented the Comedy Central channel as a platform that seeks the fun side of life and said “Our most awarded and positioned content are: South Park, Stand Up: Blame it on Columbus/ women’s edition,among other titles.

Florencia Constantino took the opportunity to emphasize that Telefé is the signal that almost 30 years ago entered the house of the Argentinians and became part of the family, “Telefé creates stories and content that are recorded in the hearts of viewers and in the culture of the country.”

Federico Canónigo, VP distribution of the Southern Region, focused on the cable operators and based his exposition on effective marketing to the subscriber of premium content. “We are a country that has 85% penetration in pay TV. Today we add 3 new players who multiply the offer: Telefónica, Telecom and Claro. We are investing in multi platform to have a complete proposal. We generate content and make sure it circulates on all platforms. These are the pillars to position: Fox Premium app & TV. “

As for the marketing of Premium Products, commented that in FOX “we define three stages of commercialization: purchasing, loyalty and retention: a very important stage in these times of economic crisis. We have developed tools for subscriber retention such as: sales sheets, e-newsletters.”