They are in different stages of production, including original content and co-productions for 2019 and 2020. Additionally, Netflix confirmed the opening of its offices in Mexico City for this same year. 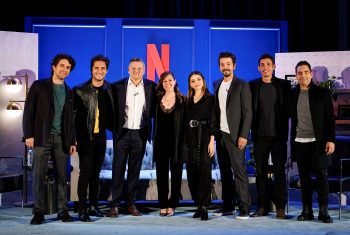 As part of the FORO conference: an original Netflix event, Ted Sarandos, Executive Director of content at Netflix, met with the creative community to discuss the importance of Mexico in the entertainment world and future company plans. “Mexico’s wealth of talent in front of and behind the cameras was key to the decision we made four years ago when we began our original production strategy at the international level with Club de Cuervos. Since then, we have continued to expand our investment and continue to provide a platform for Mexican talent to continue to be recognized around the world,” he concluded.

Rio Grande, Rio Bravo is a project of five short documentaries with Gael García Bernal as executive producer and produced by Elena Fortes and Daniela Alatorre of No Ficción, and includes directors such as Trisha Ziff, Juan Carlos Rulfo and Everardo González, telling stories that happen on the border between Mexico and the United States. In addition, other documentaries will be released before the end of the year that touch on topics such as historical events, crime, sport and gastronomy.

A number of new projects will be added to our original Mexican series, including Los corruptores, based on the homonymous novel by Jorge Zepeda Patterson, and the adolescent series Sofía H., both produced by Lemon Films; Bandidos, produced by Leonardo Zimbrón and created by Alejandro Brugues and Esteban Orozco; El Club, which is already in its production phase, produced by Argos, created by Camila Ibarra and starring Alejandro Speitzer, Minnie West, Jorge Caballero, Axel Arenas and Arcelia Ramírez; and an untitled thriller produced by The Immigrant, with executive production of Camila Jiménez and Silvana Aguirre.

Projects previously announced that will begin shooting this year include Selena: The series, based on the life of Selena Quintanilla and produced by Campanario; the second season of Manolo Caro’s La Casa de las Flores; and American Jesus, based on the graphic novel by Mark Millar and produced by the brothers Leopoldo and Everardo Gout. After the success of their first comedy specials on Netflix, Franco Escamilla and Daniel Sosa will also return with new specials this year.

In Netflix, audiences around the world can discover the stories of acclaimed Oscar-winning directors such as Alfonso Cuarón and Guillermo del Toro, as well as Mexican talent with worldwide profiles as Diego Luna, Jorge Gutiérrez and Gael García Bernal, and renowned actors such as Luis Gerardo Méndez, Marina de Tavira, Kate del Castillo, Verónica Castro and Cecilia Suárez, and new voices such as Yalitza Aparicio.