This month of April the channel inaugurated its programming schedule with the broadcast of the International Emmy award-winning series in 2013 for Best Telenovela: Lado a Lado. 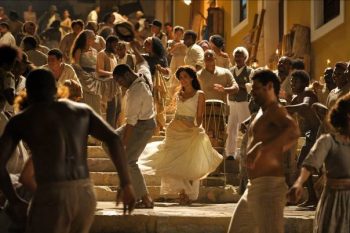 With this story, written by Joiao Ximenes Braga, directed and produced by Vinicius Coimbra, GLOBO confirmed the Brazilian supremacy in this television genre.

The series centers on the story of two women -Isabel (Camila Pitanga), daughter of ex-slaves, and Laura (Marjorie Estiano), rich young woman from Rio de Janeiro-, share the same ideal: the conquest of women’s freedom in the society of the early twentieth century. The pain and the anguish will unite them in a story marked by great political and social transformations.

A story that conquered Brazilians, reaching nearly 28 million people daily, according to IBOPE data. Also, in Portugal was one of the most watched pay TV programs in the country.

Since Wednesday, April 3, began to broadcast in ATRESERIES, Monday through Friday, fruit of the agreement reached by ATRESMEDIA with the Brazilian GLOBO group, one of the world’s largest audiovisual producers.