Within the framework of the Expo ConvergenciaShow, in Mexico City, founder and president  Mario José Sousa Gómez, presented the channel with artists and executives of the signal and spoke with TVMAS 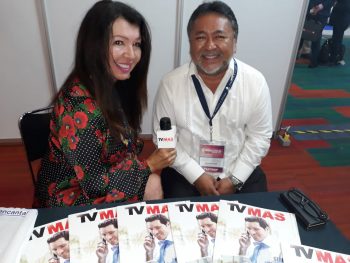 Oriented to the recovery of values through family entertainment programs and information.

The businessman and President of the channel during his wonderful presentation which included artists of the likes of Alejandro Camacho, Ariel Lopez Padilla and Alberto Bolaños, told TVMAS that “This channel is born of the need for a healthy and entertaining television in response to the loss of values expressed by viewers, so that violence and aggression will not take place.”

The channel aspires to produce 10 thousand hours of programming per year: musical, sports, children’s, series, telenovelas, information and analysis. “An ethically responsible television is a piece to achieve the progress of society of any country in the world” concluded the founder of the channel.