The fifth edition of the 4K-HDR Summit will take place at Polo Nacional de Contenidos Digitales de Málaga, with the participation of the main technological multinationals and producers of Ultra High Definition (UHD) content, both 4K and 8 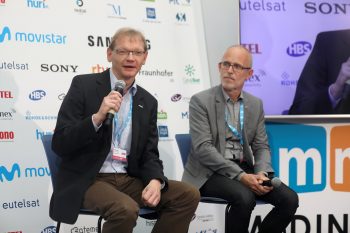 The Japanese multinational Panasonic will have a relevant role in the 4K-HDR Summit of Malaga with its sights set on 2020, year in which it will be one of the technological protagonists of the Tokyo Olympics Games, of which it is a sponsor and main supplier with the cameras that will generate the signal that in Ultra High Definition (UHD) will be transmitted worldwide.

German engineer Stephan Hoffman, head of Camera Equipment Engineering, will be in charge of representing Panasonic at the 4K-HDR Summit.

“The new Panasonic 8K camera is based on a new organic sensor technology, which will be used for the first time at the Tokyo 2020 Olympics Games, and that are the future of cameras in Ultra High Definition,” Hoffman said in the past IBC from Amsterdam where he presented the new range of his products.

More than 300 Panasonic engineers have been working for months at the headquarters of NHK, Japan’s public television, in charge of producing the signal that will be offered to the whole world through open channels, pay-per-view channels such as Eurosport, platforms like Twitter or DAZN, etc.

The presentation of Stephan Hoffman will take place on the second day of the 4K-HDR Summit, on Thursday, November 7, at 3:30 p.m.

Panasonic is in full celebration of its 100 years, with excellent economic results in both Spain and Latin America, where its products in 4K, especially cameras, have had an excellent acceptance among producers for their quality/price ratio, its technical service response and maintenance.