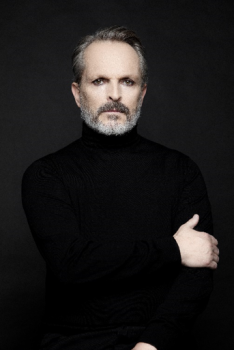 Bosé is an internationally recognized artist who has over 30 acting credits and has sold more than 40 million records, being named “Person of the Year” in 2013 by the Latin Recording Academy (LARAS) and “Artist For Peace” by UNESCO and has more than 70 hits that have reached #1 on the European and the Americas radio charts.

Overseeing the development and production of the Bosé TV series will be Shine Iberia’s CEO, Macarena Rey, who is known for her European successes “Masterchef” and “21 Días”. Elefantec Global, the newly formed media & entertainment company from Jose “Pepe” Baston, along with Legacy Rock Entertainment, are co-producing the series and will handle international sales, marketing and distribution for Mexico and Latin America.

“I was to live an exceptional life, full of privileges as well as miseries, born in the Olympus and wagered in hell, but nevertheless thrilling, unique and unrepeatable.  Time has come to tell it all.” said Bosé.

The TV series will focus on his interestingly dramatic life. Growing up as the son of the celebrated Spanish bullfighter Luis Miguel Dominguín and the movie star and Miss Italy, Lucia Bosé, Miguel was always surrounded by some of the greatest artistic personalities such as Picasso, Visconti, Dalí, Warhol, Ava Gardner, Deborah Kerr, Cocteau, Hemingway, Audrey Hepburn, Sofía Loren and others, all of whom have had a provocative influence on his life.  The series will explore the turbulent relationship with both his mother and father, his path to stardom, his multiple personal relationships, the modernization of a country as personified by him and how he was the catalyst of the Spanish language pop music revolution.

“This project represents an amazing challenge for Shine Iberia.  Miguel Bosé is an icon for Spanish speaking audiences worldwide,” said Macarena Rey, “To talk about Bosé is to walk through the history of Spanish music over the last decades.  He is a fascinating character with a unique and intense life story.  We are certain that this TV series will be a big event for all Spanish speaking music lovers.”

“We see the growing demand of premium content for the Spanish-speaking viewers around the world and across many different platforms, and this series has everything: drama, love, struggle, growth, forgiveness that will appeal to viewers around the world,” said Pepe Bastón. “We are very excited to work alongside our associates at Legacy Rock Entertainment and have been invited by Miguel Bosé and Macarena Rey to participate in this project for Movistar and we look forward to bringing this as well as other high-quality productions to the world.”

Shine Iberia built in 2012 with the aim of producing great television programs for Spain and Portugal, originals and format adaptations of Shine group and third parties.

Elefantec Global is a technology-driven media and entertainment startup serving the global Latino audience. Based in Los Angeles, Miami and Mexico City, the firm was founded by team industry veterans including Jose “Pepe” Baston, Jeff Symon, Carlos Martinez, Carlos Sandoval, Antonio Alonso and Daniel Ucros. In addition to its technology solution and music division, the firm already has exclusive arrangements with high-profile content creators and over 50 original media properties in development, including dramas, biopics, comedies, thrillers and scripted reality.

Legacy Rock Entertainment is a media production company founded by Amir Agai and Antonio Mauri, based out of Miami and Los Angeles.  The newly minted startup will specialize in the development and production of premium multi-platform content geared toward the U.S., Latin and International markets.