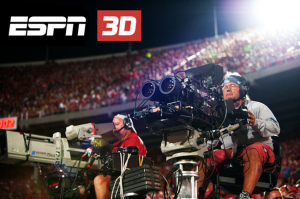 The sports network ESPN announced the closing of its 3D channel later this year because the format that was born as the great revolution of the entertainment industry and many manufacturers saw as the lifeline to pick up their balance sheets became a disappointment. The U.S. network said that viewers have had a “limited adoption of 3D services in their homes.”

Avatar in 2009 broke the 3D fever bewitching  TV networks and the film industry so that they saw a niche to attract a wider audience. In the period 2010-2011, in addition to ESPN 3D, two other channels were born in the U.S.: one of the hand of DirectTV and another created by a joint venture between Discovery, IMAX and Sony. After this, ESPN predicted a “3D tsunami.”  However, after a year, DirecTV was the first victim to close its alternate channel

And this result should not be unsurprising, since a study by the consultant IHS found that less than 10% of Americans have 3D TVs in their homes and is of little use. One reason would be that it is inconvenient for users to have to use every time the 3D glasses to get the effect of three dimensions.

It has also influenced the high cost of recording with a double camera shooting longer to take effect, which in many would be twice thecost of a normal TV program.

The interest in 3D films has also been declining. Disney, which owns ESPN, abandoned its strategy to re-release films in 3D cartoon after”Finding Nemo” and “Monster Inc.” performed poorly. The phenomenon has also been reflected in the overall industry. According to the U.S. Motion Picture Association, revenues from 3D movies in the U.S. and Canada recorded no growth over the previous year, with U.S. $ 1,800 million.

And despite all the bad omens, the sports network said: “No one knows more about sports in 3D than ESPN, and we are ready to deliver the service to fans if 3D takes off again.”