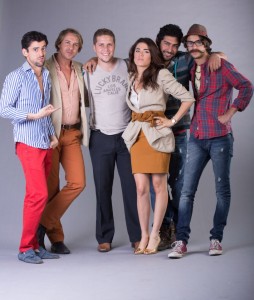 The story and was purchased in Spain, United States and Peru.

After breaking box office records and admissions of Mexican cinema, with more than 7 million viewers and nearly 340 million in revenue, the film is topping the charts, and now on digital downloads and physical sales on Blu-ray and DVD.

Based on the 1943 film El gran calavera of Luis Buñuel, the directorial debut of writer-director Gary Alazraki, Nosotros los nobles, was released on March 28, 2013 in all the cinemas of Mexico, becoming the most watched film in Mexican movie history, overtaking the El crimen del padre Amaro, the film held this record for over 10 years.

“We did this play with the simple premise that we Mexicans liked to laugh. Few months ago we were a bunch of kids playing. I feel that the link made ​​with the people should be honored with more work of the same quality,” said Gaz Alazraki, director of the film.

Meanwhile, actress Karla Souza, who plays Barbara, said: “It’s amazing success we achieved with Nosotros los nobles, which has made ​​many people have turned to see our work. This will generate a commitment to our following projects, as we must be vigilant about the quality of these,” concluded.

Significantly, Nosotros los nobles will be distributed in several countries, including Spain. The story has already been acquired by markets like Spain, United States and Peru, for local versions.