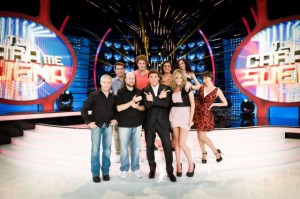 The first of the month, will launch in prime time “Number One” by TCS in El Salvador, a territory that bet a second time to a Dutch production format.

During the second week you can see on the screen of Ecuador the first episode of the local version of “My Name Is” format is also currently airing in Peru, Bolivia and had great impact on Colombian and Chilean editions.

On the other hand, “Tu Cara Me Suena” lands in Panama on September 11 and will include the Argentine version in mid-month.

Costa Rica is again partnering with Endemol premiering on September 17 its second season of “Deal or No Deal”, thus seeking to repeat the excellent results of its first delivery.

In the coming months we will see a second edition of “Extreme Make Over Latin America” ​​on the Infinity screen with its exhibition on Argentine open television, added to a version of “Cuestion de Peso” in Brazil, which adds to the adaptations in Dominican Republic, Chile and Paraguay, currently airing and new versions in Colombia of “My Name Is” and “Tu Cara Me Suena.” Finally Ecuador will surprise audiences with its adaptations of “El Ultimo Pasajero” and “El Guradaespaldas.”

To this wave of releases are added the programs that are all the rage in the air, such as “A Todo o Nada” in Chilean and Paraguayan versions, “Deal or No Deal” in El Salvador and “Money Drop” in Uruguay and Argentina.