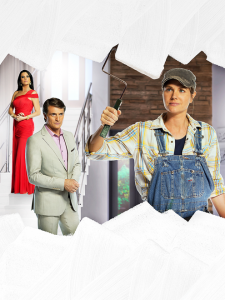 After the success in the US, “Marido en Alquiler”  was released on September 2 in Panama by TVN, and in Venezuela by Televen. In its first week on the air, the dramatic production recovered the leadership in prime time audience for both channels.

This Telemundo and Globo co-production is based on the original story of the Brazilian network Fina Estampa, which earned an average of 60% of audience share when it was transmitted -around 36 million viewers- and an impressive 77% with the final episode.

“Marido en Alquiler” stars Sonya Smith and Juan Soler, accompanied by Maritza Rodríguez and Miguel Varoni as counter figures. The fresh and modern story revolves around Griselda Carrasco, a humble woman of strong ethical values that has the unusual job of being a handyman.

Griselda’s strength is put to evidence after she has to bring up alone her three sons and her grandson, while ignoring what people say. Her luck changes dramatically when she wins the lottery and becomes a millionaire. This twist of fate makes her confront a high-class lady who despises her, whose husband is the object of her love. So, a fierce battle breaks out between these two strong characters.

“Marido en Alquiler” airs in the U.S. Monday through Friday at Telemundo 9pm/8C