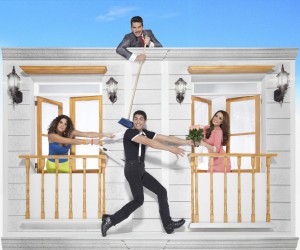 The Mexican conglomerate, property of Salinas Group, TV Azteca, and distributor Comarex, will present their most recent products at MIPCOM in Octuber. Azteca will bring the dramas “Corazón en Condominio”, “Destino”, “Vivir a Destiempo” and “Confesiones del más allá”, all of them produced in 2013; as well as “La Otra Cara del Alma”, “Los Rey”, “La Teniente”, “Amor Cautivo”, “Quererte Así” and “La Mujer de Judas” from last year; and “Huérfanas” and “Cielo Rojo”, both from 2011.

On the other hand, Comarex will attend with “The Clinic” and “The Shelter”, as well as the program “Conectados”, the thrillers “Mystery Island” and “Angel Face”, teen series “Senior Year”, “Popland!” and “Grachi” and the HBO original series “Alice”, “Capadocia”, “Epitafios”, “Hijos del Carnaval”, “Mandrake”, “Fugitives” and “Mujer de Fases”.

TV Azteca’s main bet, “Corazón en Condominio”, is about the adventures of Óscar (Víctor García), a simple taxi driver whose life does a full spin when he wins the lottery and with his kindness has to confront the object of his affection’s snob neighbors.  Meanwhile, “Destino” tells the story of Valeria (Paola Nuñez) and her struggle for the love of Sebastián (Mauricio Islas), ignoring that her rival is actually her real mother.

Another new drama, “Vivir a Destiempo”, portrays how Paula Duarte (Edith González), involved in an unfortunate marriage, reunites with her past love (Humberto Zurita) and both have to overcome many obstacles in order to be together again. To complete the offer of recent products, “Cofesiones del más allá” is a drama based in real life stories of paranormal events experienced by celebrities, who dare to talk about them for the first time.

Meanwhile, the novelties that will be brought by Comarex at MIPCOM include Adicta Films series “The Clinic”, which dares to explore funny love stories that happen inside a psychiatric facility, and “The Shelter”, a comedy that mirrors the typical dysfunctional family, along with MTV Networks’ teen thriller “Senior Year”.