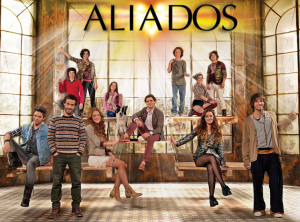 The distributor of the Argentinean channel will present its latest innovations at the next entertainment content global market meeting, MIPCOM, to be held from Monday, October 7th thru Thursday 10th at the Riviera Sea View Palais Des Festivals in Cannes, France.

Among the new features of Telefe is “Aliados”, the teen telenovela which marks the return to television of hallowed Argentinean producer Cris Morena, a pioneer of this fiction genre and producer of great hits such as “Tiny”, “Rebelde Way”, “Floricienta” and “Casi Angeles“.

The format of “Aliados” is in line with the new era and it is the first 360° project of the channel, an innovative platform format never previously realized. The series has 40 episodes in HD that are broadcasted every Wednesday in Telefe’s prime-time and complemented with 7 min Webisodes premieres broadcasted daily on the Web site www.telefe.com/aliados.

Thanks to an agreement between Telefe and Fox International Channels Latin America, the production will be seen simultaneously across the region through FOX channel. Thus, “Aliados” manages to become the first product that combines open TV, Web contents and pay TV windows, through its simultaneous programming strategy.

Furthermore, Telefe will provide a good sample of its most successful products, starting with the family comedy “Los Vecinos en Guerra”, starring Eleonora Wexler and Diego Torres, in addition to a great cast that accompanies them, and produced by Underground, Endemol and Telefe, the same creative team of the 2010 success of the year, “Graduados”.

In the drama genre, “Historias del Corazon” is a series of 30 unitaries starring a rotating cast of great actors, offering unique and original scripts to get excited about and reflect on, around topics such as  love, infidelity, friendship, among other aspects of human relationships.

The police series “Ramírez” produced by Margarita Morales for Media Networks, in co-production with Imizu International, propounds crimes investigation with a dramatic treatment, based on the psychology of the characters. The production has 30 episodes in HD starring Gianella Neyra, next to Oscar Carrillo, Oscar Beltran, Regina Alcover, among others.

For telenovela lovers, “Dulce Amor” starring Sebastian Estévanez, Carina Zampini, Juan Darthés and Laura Novoa, is a co-production of Enrique Estevanez and Telefe which aired with great success in prime time on this channel. His story captivated the Argentinean audience from the first day, becoming the most watched fiction in local television in its timeslot.

Finally, the romantic comedy “Graduados”, produced by Telefe, Undergound and Endemol, was the hit of the year 2012 in the channel’s prime time, becoming the all time most-watched fiction of Argentinean TV. This is an original script by Sebastian Ortega and tells the story of a group of former high school buddies who reunite twenty years after graduation, with a love story that will engage them again and change the course of their current lives. “Graduados” stars Nancy Duplaa and renowned film actor Daniel Hendler, among other prominent figures.