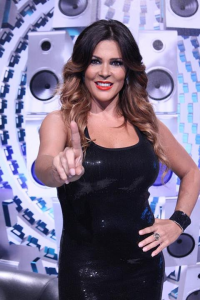 “The largest and most ambitious project of Salvadoran television, with a super production, a set with the best technology and a forum built especially for this program” thus cataloged Salvador Gadala Maria – Vice President of Sales and Programming TCS – the Endemol format that premiered last Sunday on Channel 2 .

In an era where the public can express their views simultaneously with what they see on television, “El Numero Uno” exceeded all expectations when the first show got over 200,000 comments  on Twitter, attained for “NumeroUnoSV” to be in the timeline of 1.5 million Salvadorans and over 17,000 people visited the official site, by making rage in networks.

“As TCS we feel proud of transmitting to our audience programs, that as this has guaranteed success and unite our Salvadoran families” adds Gadala Maria.

Michelle Wasserman – SVP Endemol International Business Latin America – added “We are very excited that a group of the magnitude of TCS trusts once again in our programs, which has devoted a major effort and an outstanding promotional support.”

El Salvador was the first country in Latin America to adapt the Spanish event which ended its second season in Antena 3, which seek professional singers who have not had the chance to show their talent. Meanwhile Channel 4, of the same group has more than three years on the air with the successful Endemol format Trato Hecho (Deal or no Deal).

“El Numero Uno” hosted by Monica Casamiquela , can be seen each week on Channel 2 on Sunday from 20 pm to 22hs .