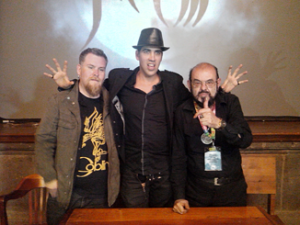 Great personalities of the horror film industry, met from October 3 to 6 in the second edition of FERATUM FILM FEST in Tlalpujahua, Michoacan, Mexico. Figures such as the Canadian illustrator Gary Pullin, who presented at the Festival, an exhibition of his most outstanding works in the horror industry, and Brazilian actor and director Jose Mojica Marins, a pioneer in horror films, who received the bronze medal for more than 60 years as a film director in the horror genre, as well as 50 years as an actor of the same.

Likewise, the Canadian director, Rodrigo Gudiño, were part of this film event which presented during  four days 52 national and international feature films and 63 short films competing for the coveted statuettes.

The FERATUM director, Miguel Marin Colín, assured TVMAS that this year presented a solid festival with a large participation of foreign filmmakers. Marin ensures that this effort establishes them at the height of the most important festivals worldwide.

The feature film responsible for the opening of the festival was The Rambler, of American director Calvin Reeder, who had its exclusive premiere at the festival before starting their international distribution. The short films projected were Honeymoon Suite, of Zao Wang and Caminando las Noches, of Christina Esquerra, from China and Mexico respectively. Also paid tribute to the mythical character of El Santo, which is part of the history of cinema in Mexico.

The xtreme award was for Visceral, entre las cuerdas de la locura (Chile), of Felipe Eluti; in the category of fantasy feature and science fiction was for Buscando la esfera del poder  (Argentina), of Tetsuo Lumiere; and the best documentary film was The birth of the living dead, Rob Kuhns (USA).

In the list of short films, the main medal went to La Ciudad de Gao-Feng, of Oril Martinez (Spain), this being the best international short. While the best Mexican short was for Viajero Eventual, of Xavier Velasco, and the best horror short was to Nos Vemos en Viena, of Dominick Hartle (Austria-Chile).