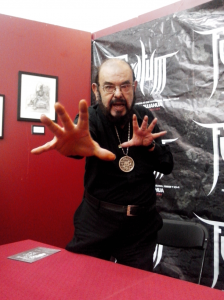 Within the framework of the second edition of FERATUM FILM FEST, held in Tlalpujahua, Michoacan, Mexico, the Brazilian director José Mojica Marins (Zé Do Zao Cai), one of the filmmakers that renewed the terror industry in South America, was recognized for his career with a BRONZE FERATUM, for more than 60 years as a film director and 50 as an actor, to portray Cai Ze Do Zao, character that led him to worldwide fame and became an icon of the genre.

With over 40 films to his credit as director and as an actor over 30, Mojica remembers who lived half his life in a movie theater where his father was the manager, ensuring that he never could conceive another job if not the to be a film director and above all of horror especially at a time with many limitations. Many of his works were inspired by Mexican films, which himself is a named fan of the films of “El Santo”.

Despite the limitations with which he always worked, his first films in 8mm format, stressed the profile that it would have to have his other films. With the constant struggle that certain sectors bias toward surrealism had always expressed his admiration for the work of directors, Luis Buñuel and Roman Polanski, but mostly always admitted his taste for the dark and gore.

His fame as an actor came with the character of Zé Do Zao Cai, created from a nightmare he had after losing several friends and which rolled several films with great acceptance in Brazil and abroad, even invited him to participate in American cinema, a proposal he rejected because of the censorship that this had at the time. This character has marked his career and people on the street were afraid of him to believe him to be a demon to an extraterrestrial alien, assures.

The director of such classic films as “A Media Noche”, “La Maldicion” and “El Despertar de la Bestia”, reveals  to TVMAS, the lack of good directors of the genre today as were Luis Buñuel, Alfred Hitchcock and Roman Polanski. He claims that films like the Twilight are weak and bad for lack of passion in the genre.

“The horror industry is going through a time of lack of talent. We’re in a time in which terror allows you to do a thousand things and you need good directors with imagination who dare to everything,” said Mojica Marins.

Finally, the director stressed that later this year in Brazil, will begin the filming of a movie based on his life as a director, which hopes to present in 2014.