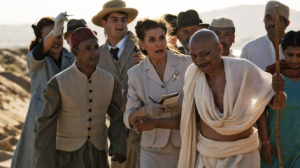 The History of the World

Giving life to 70,000 years of human history, the new co-production of Discovery Channel and the BBC, is a journey through time to document the events that marked the great civilizations of the past and present. With the emergence of key characters in the same places where these events occurred, the program provides viewers the opportunity to interact with the people that shaped the world since the first settlers of Mesopotamia to the wonders of Babylon and Egypt, without forgetting the French and Industrial Revolution.

The series shows the dynamic historical process of humanity in an extensive report of 10 chapters that accounts for the progress, development and evolution achieved through the centuries. The program will be broadcast through the Latin America Discovery signal every Sunday at 20:00 hrs from October 13.

The History of the World reveals how events such as military campaigns, love relationships, murders, medical discoveries and natural disasters has had decisive and far-reaching effects on the common history of mankind.

Shot in international locations, such as the Valley of the Kings in Egypt, the army of terracotta warriors in China, the Nazca lines in Peru and the palace of Knossos in Crete, the series makes the viewers eye witnesses of the most important human events, witnessing the death of Julius Caesar in the Roman Senate, embarking with Christopher Columbus to live the moment of discovery of America, and experiencing the chaos that led to the outbreak of the first economic bubble.