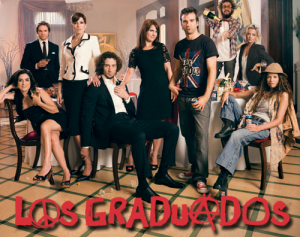 The analyst Omar Rincon recently headlined his column in the newspaper El Tiempo:  “Graduados sin diploma” (“Graduates without diploma”). We quote some of his valuable comments and present reflections of also recognized Argentine creator and writer Ramiro San Honorio as well as an explanation of one of the best adapters – but the best in Colombia, Cecilia Percy all interviewed by TVMAS for this analysis.

“Los Graduados were a party in Argentina (Telefe), around its music and characters they created a retro nostalgia movement, coffee and matte everyday. Los Graduados came from Argentina to Colombia (RCN) and for now they do neither delight nor convince they are loosing the year.” So begins the important analysis of Rincon.

“The 80’s were a time of romance and produced the generation that now is the queen of consumption which earns little but spends much and which long for when every thing seemed possible.”

“To do something about the 80’s would be a success. And that is why Los Graduados was acquired by RCN. The paradox is that they have not been able to obtain the diploma from the audience. Why?”

“Los Graduados intended to be comedy but its actor’s high gestures, extravagance and clamor do not achieve the objective. There are no situations but dialogues that supposedly invite laughter; there are no characters but funny men; there is no sentimentality, but a mockery of an era”.

“The regression of the first chapter was creepy. Temporality changes end up in an ode to the cliché and ignorance of the drama. Is this sitcom (?) The likelihood does not appear.

Neither presents the aesthetic feeling of the eighties, or situations that produce humor.

A playful dialogue as comic relief… and over acting as a resource to make people laugh.”

“The TV public is popular and has other references of the 80’s. And for them there is no winks, no dialogue, no situations are not recognized, or generate identification. The rich look pathetic. The poor do not exist. The 80’s in Argentina refer to educated people in Colombia you have to try other references”.

Soda Stereo, Miguel Bosé, Cyndi Lauper, Fito Paez, Caifanes, Unlimited Company … but the music is as adornment, added, landscape, noise and does not become part of the story”.

“The tone of comedy and rebellion of the eighties does not appear. One as a viewer passes between yawning, and the anger of: it can’t be! Then occasionally a smile. It’s over with the myth of the 80’s. It was so funny!”

As a specialist you are what were the elements that made a successful GRADUADOS in Argentina?

The series “Los Graduados” was a huge success in Argentina for three main reasons. First, because Ernesto Korosky and his team of authors worked a good story with strong characters and turns well posed in each broadcast. The second is the theme: the “reunion”. Precisely at a time when social networks became quite important and many groups began to connect again helped the viewers to approach the screen. Groups of the generations of the 80s, 90s who organized reunions were manifested in the series and was something that managed a strong identification. Getting back to being a teenager, to win the lost love, have a new opportunity to revive old golden ages, have a new “graduation in life.” The third is that the characters had a great transformation, a three-dimensionality that worked very well with the proposed genre in the history of the reencounter. All of us have experienced this stage, as a group of students. We saw the most studied ended up leaving university, the shy boy and short stature wound up being an advertising model, the cute stop being so cute and the chubby likeable became a total diva. Some of these changes give the “Back story” necessary to complete resentments and passions in dramatic conflict.

If you were an adapter for a story like this in particular, in any country in Latin America what things would you not change and which would you change and adapt locally?

Being “parochial or in the habit” in series or telenovelas in Argentina is a problem. We have many idiomatic and cultural activities that may appear disconnected to the rest of Latin America, for example, take “mate” or phrases very “local”. Mainly you have to try to be more universal in some issues, without losing its identity. It is also a product that can quickly get an identity in each country. All countries have graduates, they all have similar stories, and structurally it can work with the classical concept past-present-future, a plot in the present that takes things from the past to point to the future. Change places and musical themes depending on each location identification. As the characters have universal traits, and need not be profound changes in the profiles. The main thing is to attain the identity, which easily connect the story with the customs and cultural issues in a region.

A writer who adapts a good story what challenges or obstacles does he face?

An author who faces the adaptation of a good work must first understand why it fits, if adapted to another format, if adapted for another time, or is it to transform questions of region or enhance the plot. In all cases, consider the original story. There are items that should not be transformed, must not be touched, but would lose an important part of the identity of the work. For a good story, the author should leave intact the essence of the plot and the features that define the characters. If the author feels that the story is not yet solid, there they should rethink deeper changes, characters that can go and new ones appear. The biggest problem is coping with the idea of ​​the other, think like the author of the work to understand it better and thus collaborate with the transformation.

How much of the channel or the producer influence the creative process and/or adaptation?

“In the case of series and telenovelas the producer greatly influences in the adaptation. The vision of what is possible to “make” is essential. In Latin America, according to the country the level of production varies greatly and this affects the final product. We have to consider merely production parameters and the author should understand that address and transform scene without losing the dramatic force. There are scenes costly not worth for what they “tell” scenes that are not essential and it costs to produce. It is necessary for the authors; the writers have a broader notion of a set and learn production variables. Authors who develop ideas and adaptations under a defined production scheme. Constraints help creativity, though, until they are constraints that you find out the day before the delivery of the script. There is a creative time required to resolve dramatic issues, but we all know that time does not exist on television.”

Moreover, the renowned Colombian writer Cecilia Percy adapter of Gray Anatomy (A Corazon Abierto) and Brothers and Sisters we replied:

Why the adaptation of GRADUADOS a successful Argentine teleseries is disappointing in Colombia?

One can speak of universes that do not connect and characters that do not generate identification, to the emotional moment that goes across the country, which could not hit certain types of stories. But it is very difficult to know why. There is no manual that guarantees that a product (whether adaptation or original) will be successful. In the case of adaptations, the success it has had in their country of origin influences the purchase of the format, but is no guarantee of its success. It is a bet with some previous points for, but ultimately the audience is the decider, and this is not as easy to interpret.

Do they know how to adapt in Colombia? Is that there are many cases of failure in adaptations of several hits. Would it be worth to analyze deeply, professional and sincerely this topic?

In Colombia, the exercise of the adaptations is relatively new, so we’re still in a stage of “trial and error”. It starts (or should start) by a judicious exercise of the original product analysis, based on the universe, characters and stories: What can work in the country, if the characters and their characteristics are easily appreciated or remembrance, if there are similarities between their conflicts and ours, etc. We analyze the likelihood of behaviors or situations in the light of our character and proceed to build a new story, using these useful items, discarding the concept that the adapters are not and creating what it takes to give strength to the history.

Of course this depends on the type of business that the producer or channel made ​​with the owner of the original product. I understand that each contract is different and sometimes there are contractual restrictions that do not allow much freedom (this can influence the success or failure of an adaptation).

It is important to note that, in the case of Colombia, the adaptation involves an additional challenge, since the country does not do weekly broadcast products (such as are the series usually worldwide) but daily. So is part of a much lower number of episodes that end being adapted (for example, a database of 23 original chapters can become a season of 80 episodes or more daily emission.

The channels and producers what kinds of warranty do they have when they purchase a success story that will also be successful? And what things intercede to turn out to be opposed? Negotiations? Contract? Adapters? The staging? The casting? What is it?

Each business may be different, but in general the writers do not have access to these terms. However, this exercise which I mentioned in the previous answer is analyzed by both the national channel and the owners of the original product, and after agreement on the proposed changes is approved. From there, we the writers start to assemble a roadmap and chapters, with certain restrictions or freedoms previously agreed.

The truth is that successful adaptations of works are a failure. Even by Televisa, the largest producer of Spanish-language content to the world as Corazon Salvaje, Rafaela y La Tormenta among other titles./By: Amanda Ospina, Director of TVMAS Magazine