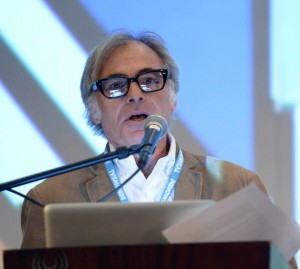 The eighth edition held in Johannesburg, South Africa from November 6 to 8, an increase of 18% attendance over the previous year. With the participation of over 670 companies, including more than 300 TV stations and pay TV platforms were active during conferences, agreements and acquisition of contents, having as a central theme of this edition, the production and co-production opportunities to generate global contents.

“It is a real pride to conclude another successful edition of DISCOP Africa. Both African and foreign producers had three days of busy schedules with closures of agreements and relevant conferences. Growth of African contents industry and its role in the international market continues to grow and this event has established itself as the most important annual business meeting of the region” said Patrick Jucaud, general manager of Basic Lead, organizers of Discop Africa.

Major TV networks such as Telemundo, Globo and Televisa, among others, presented their best catalog of 2013 and 2014 advances to sale and distribution of contents on this continent. Among the agreements signed within the framework of Discop 2013, highlights the association of Diffa (Distribution International of Films and Fiction from Africa) and M-Net in South Africa, who will produce the first French series developed in Africa, Les rois de Ségou, of Brico Films of Mali.