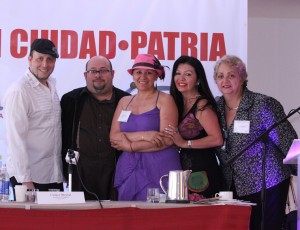 After 10 successful meetings ended uninterrupted this meeting held in San Juan, Puerto Rico on November 13, 14 and 15. Assembled leaders, creative and executives of the main channels and production companies from 18 countries debated over three days on the challenges and business opportunities of telenovelas and fiction series.

Among the many challenges facing the industry were discussed issues such as the decline of traditional television audiences, threatened public TV, the disappearance of prime time due to consumption on mobile platforms, exploitation of the brand across all media, integration of stars and products in the content, transmedia narratives, the user-centric multi-platform, and tremendous opportunities for telenovelas and short and long series.

All lectures were developed with the highest level with the likes of Hollywood director Betty Kaplan who currently resides in Los Angeles and has directed films like “Dona Barbara”, “Almost a Woman in Love” and “Love and Shadows” the latter an adaptation of the novel by Isabel Allende. Her works include a script and direction of “Bolivar” and several series and miniseries. Carmen Mirabal, Puerto Rican journalist and author of the series “La Diva”. Bethel Flores, Mexican writer recognized creator of “Pequenios complices” “Amarte así”, known as “El frijolito” theater actress, producer and television host Sonia Valentin (WAPA TV), actress and TV personality of UNIVISION Lisa Lugo, artistic director Carlos Santos, Cisneros Group’s Venevision Studios, the director and producer Italian- Spanish Valerio Boserman; filmmaker and Mexican director Carlos Melendez and others.

Discussions by the most renowned international experts on cutting-edge issues related to business and new technologies and marketing on-line were of great interest because of its usefulness, depth and opportunity. The meeting, which purpose is to promote the fiction business (telenovelas, series, miniseries and Unitarians) worldwide, has become the benchmark in setting a standard unparalleled in the history of this industry. Issues such as the design of audiovisual products 360 degree marketing strategies and online marketing, crowd -funding and other new forms of collective creation of financing and content outsourcing, Internet as a catalyst for audiovisual sector of multiple platforms: Webseries, webnovela, Phonoseries, Phononovelas and transmedia content in audiovisual production (video games, merchandising etc.).

Finally, the framework of this event was also the scene for the Ibero-American Writers, closing with a flourish. This gathering of writers began during the summit held in Colombia in 2009, time that had as special guest writer Fernando Gaitan, creator of the popular Betty La Fea. This time writers from Mexico, Peru, Nicaragua, Venezuela, the United States and active writers on major television channels and production houses in Puerto Rico, analyzed and shared experiences on transmedia narratives and exploring genres against demand and fierce competition.

As part of the event we paid tribute to entrepreneur Ellis Perez, Dominican and who recently turned fifty years of hard work in the media, which he claims the career has not been easy, but of many accomplishments. He is currently the CEO of the Motion Picture Corporation of Dominican Republic.

With an audience so nourished, this encounter settled a scenario for the development of new products and update attendees on the latest trends in creating, producing, scheduling, distribution and business, with a view to making better use of domestic and international markets.