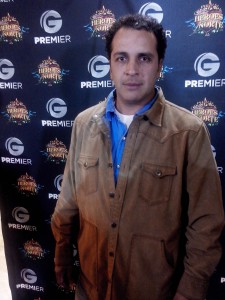 Gustavo Loza, producer of the series.

The pay signal, owned by Televisa Networks, presented to the media the third season of the hit series Los Héroes del Norte. The original production of Gustavo Loza began broadcasting from November 25 at 21:00 hours through the channel a la carte option. With 16 chapters that make up this new release of this new story in Cuba, where they will have to deal with Cuban society to survive and seek its return to Mexico, without  imagining the surprise that awaits them.

“This season we continue with the spontaneity and charisma of all the characters. I believe it is a well-established series that allows us to create more seasons with the same touch of comedy that so much has pleased the television viewers unafraid to wear it down. Although we don’t yet have defined a fourth installment, we’re working with Televisa scripts of the film, which we will begin shooting in the second half of 2014,” said Gustavo Loza to TVMAS.

He added that filming will take place between the two borders: “We plan to film between Mexico and the United States. We will have the participation of great exponents of band music, as well as actors who have participated in the three seasons of the series.” concluded the producer.

“Los Héroes del Norte” will have space in a few weeks through the pay TV channel Bandamax, later reaching the broadcast of open TV signal through the P.M. bar of Channel 5 in 2014.

The cast of the third season is headed by Miguel Rodarte, Humberto Busto, Maria Aura, Aislinn Derbez and Patricia Reyes Spíndola. It will feature the special participation of Ninel Conde, Poncho Lizarraga, Omar Chaparro and Adrian Uribe among others.

Notably, producer Gustavo Loza, already is preparing his first job in the United States called “Coyote Run Run,” a comedy series for the American network Fox, which will address the issue of people trafficking to the border. The series will feature several seasons and will be headlined by an international cast yet undefined. Filming is contemplated for the first quarter of 2014.