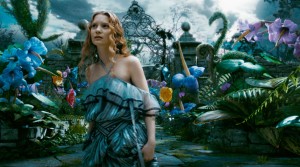 Walt Disney officially announced release dates for two important projects that they have been working for several months. The first is adapted from the work of Rudyard Kipling, 1894, The Jungle Book, which hits the charts on October 9, 2015. Written by Justin Marks and directed by Jon Favreau, the story centers on an Indian boy named Mowgli who was raised by wolves and with other jungle animals.

Meanwhile, in May 27, 2016 will reach theaters Alice in Wonderland 2, the sequel to the hit film released in 2010, directed by Tim Burton, and again feature Johnny Depp as the Mad Hatter. Alice in Wonderland scored an extraordinary collection of $1,025 million dollars in worldwide box office. Even though Burton does not participate, Disney hopes to repeat the success.

Alice in Wonderland 2 will be directed by James Bobin (The Muppets) and will feature a script by Linda Woolverton. The cast is a mystery, because Disney has not revealed any names.