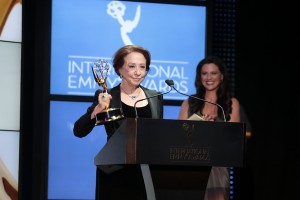 On the evening of Monday, November 25th, the actress Fernanda Montenegro and the telenovela ‘Side by Side’, by Globo, received the International Emmy Awards, during the gala ceremony held in New York, in the United States.

Fernanda Montenegro was awarded for Dona Picucha, her role in the Globo special ‘Sweet Mother’. The first Brazilian actress to win the Emmy and the only one ever nominated for an Oscar, she received the statuette on the stage from the hands of Steve Guttenberg and was thrilled when she commented on the significance of the award: “I’m very excited and now I admitted I was nervous. Never imagined winning this award! I would like to thank Globo, Jorge Furtado and the whole team. We worked with lots of love and lots of delivery. This is an award that belongs to all who had dedicated themselves to this work. I’m very happy, couldn’t be more!”.

“Winning the Emmy emphasized the talents of Globo’s artists. Fernanda Montenegro is one of the greatest Brazilian actresses, already nominated for the Oscar for her work in film, and now she receives this statuettes also, as unquestionable proof of her talent. For Globo, it is an immense source of pride to have her in our cast. This is a night of celebration, and we would like to congratulate not only Fernanda, but all those involved in the production of this special program”, said Ricardo Scalamandré, Globo’s head of international business.

Considered the grand queen of Brazilian theater, Fernanda Montenegro has amassed a collection of characters which have marked Brazilian drama also on TV and in films. In ‘Sweet Mother’, she plays Dona Picucha, an 85-year-old widow who confronts life with good humor and who knows how to take advantage of all the difficulties she face. “‘Sweet Mother’ has one foot in reality and the other in fantasy. The reality of a country of youths where there are more and more old people and many doubts about how to deal with them. The fantasy of the comedy, the music, the poetry which become a believable reality. Picucha is 85 years old and still does not know what she wants to be when she grows up. I don’t either,” Fernanda said.

The win was also celebrated in Brazil by author and director Jorge Furtado. “‘Sweet Mother’ was thought up and written for Fernanda. Only she could play the character. The story is a humanist comedy: beyond the funny moments, we also had many other emotional ones. And there, she made comedy and drama with the same intensity, the same delivery. Fernanda went from one extreme to the other rapidly. She can do anything with a lot of truth and she is extremely generous with whoever is acting with her. She is simply the greatest and best actress that I know in television, theater and cinema. Writing for her and directing her was more than a pleasure, an honor. For me, this was one of her great works, one of her great roles,” he emphasizes. ‘Sweet Mother’ was written by Ana Luiza Azevedo, Jorge Furtado, and Miguel da Costa Franco. A co-production of Globo with the Casa de Cinema de Porto Alegre, is had core direction by Guel Arraes and general direction by Ana Luiza Azevedo and Jorge Furtado. The special was shown on Globo in December 2012 and will become a series in 2014.

‘Side by Side’ was elected as the best telenovela. The statuette was handed over by Jeffrey Tambor to authors Claudia Lage and João Ximenes Braga, to directors Vinicius Coimbra and Cristiano Marques and to the actor Thiago Fragoso. Thiago was thrilled with the winning. “I can’t describe this sensation. Specially because ‘Side by Side’ was such an primorous work. It is a delight and a recognition to us”, said the actor.

The award was celebrated by João Ximenes Braga. “I am doubly thrilled with such an important recognition! ‘Side by Side’ is a very Brazilian telenovela. In the background of our love stories, we show facts which help to define the Brazilian cultural identity, such as samba, capoeira, Carnival, the popularization of soccer, religions of African origin, the favelas… So, the award attests not only to the quality of the telenovela itself, but also attests that we succeeded in making a local story that touched an international jury”. Claudia Lage, who shared authorship with João, also commemorated the Emmy win. “The telenovela discusses themes which are still polemical and complex in Brazil, such as racial discrimination and the patriarchal culture, pillars still present in our society. A recognition of this importance for our work cannot help but be thrilling and highly rewarding. We are very happy,” she said.

General director Vinicius Coimbra explained the significance of the award to him: “It is very thrilling to win the Emmy being here, among the best in the world. And with the quality of Brazilian drama representing us. The Emmy is the coronation of a great and beautiful work that we made, of the passion that we had for this project.

‘Side by Side’ speaks of friendship, love, and freedom. It narrates the story of Laura (Marjorie Estiano) and Isabel (Camila Pitanga), two young women of different origins and upbringings who are ahead of their time. The story takes place at the beginning of the 20th century, when the city of Rio is breathing in the influences coming from Europe and the transformations of the era. A time in which women begin to fight for individual freedom, and those of African descent begin to create the samba, and around it, a whole new culture.

Written by João Ximenes Braga and Claudia Lage, with core direction by Dennis Carvalho, general direction by Vinícius Coimbra, and supervision by Gilberto Braga, ‘Side by Side’ debuted in Brazil in September 2012, and will be released on the international market in the coming year.

“‘Side by Side’ is one of our big wagers for the international market in the coming year. We believe that the show is going to captivate audiences around the world in the same way that it has in Brazil. This is a night of celebration, and we want to congratulate all those who were involved in the creation and production of the telenovela”, said Ricardo Scalamandré, Globo’s head of international business. Since the category of Best Telenovela was created by the International Emmy Awards in 2008, Globo has won four of the six editions with the telenovelas ‘India – A Love Story’ (2009), ‘Blood Ties’ (a co-production of Globo with SIC, in 2011), and ‘The Illusionist’ (2012).

In addition to these awards, Globo received three other indications for the International Emmy this year: ‘Brazil Avenue’ (telenovela), ‘How to Enjoy the End of the World’ (comedy), and ‘Next in Line’ (dramatic series).

Globo is the only Brazilian TV network that has ever won an International Emmy and, with these new awards, has collected ten statuettes from the award, considered the Oscars for global television. The first was in 1981, for ‘A Arca de Noé’. The following year, it was for ‘Life and Death Severina’. It won three Emmys with the telenovelas ‘India – A Love Story’ (2009), ‘Blood Ties’ (2011) and ‘The Illusionist’ (2012). In 2011, it was also awarded for the coverage by the ‘Jornal Nacional’ on the invasion of the Complexo do Alemão neighborhood with the International Emmy for Journalism. And last year, it won one more statuette for ‘The Invisible Woman’, in the category of Comedy. In 1983, Roberto Marinho, the founder of Globo, was honored for Direction.