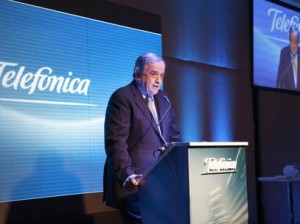 The investment aims, the development of telecommunications networks in Argentina in the next two years, allocating 5.2 billion pesos (USD $825 million) to increase connection speed, deploy new stretches of optical fiber and install new sites during 2014.

This initiative is supported by the increasing use of data and fixed and mobile applications. According to data from Telefónica, the mobile data traffic increased by 90% in 2013, with a projected growth of 60% in 2014, underpinned by the sustained rise in the sale of smartphones, increasingly more accessible to different socio-economic segments. While On Video streaming service, reflected a growth of 30% in 2013, expecting to double the figure for next year.

With more than years of presence in the country, Grupo Telefónica is one of the main investors in Argentina. The company is fulfilling its commitment to the growth of the telecommunications sector, with an average investment of 30,000 million pesos (USD $4.761 million),” remarked Luis Blasco Bosqued president Grupo Telefónica in Argentina.

According to the report submitted, the company will focus its investments in 2014, in the deployment of 1,350 new sites to facilitate access to mobile Internet services and the development of new systems and platforms. With regard to mobile telephony, which operates under the brand Movistar, Telefónica will close this year with 8,000 radio bases throughout the country. For the segment, SMEs and professionals, will seek to grow in cloud services, promoting their professionalism through a range of cloud tools, while for the corporate sector and public agencies, the strategy will focus on solutions of IT, M2M, E -health and safety information.