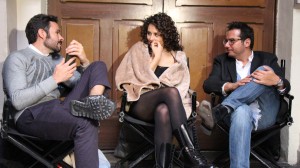 The original remake of Carlos Enrique Taboada which debuted on screen in 1975 starring Susana Dosamantes, Lucía Méndez, Claudia Islas, Helena Rojo and Pedro Armendariz, among others, is brought to the screen again in August 2014 and produced by Marco Polo Constandse, becoming the first Mexican film, made in 3D, outside of animation.

“We are risking and we face many difficulties due to the type of infrastructure required to generate these 3D productions, because the country does not have it. We want to pay tribute to the writer and director Carlos Enrique Taboada, who is remembered for his extraordinary stories of terror. In this new version will find some shots we did in honor of the age of cinema,” said Marco Polo Constandse.

In the production also available: Leonardo Zimbrón and José María Torre, who co-produced by the Celeste Films company. The direction is provided by Henry Bedwell. The Spanish company PuntolaPosPo is responsible for the effects in 3D.

The story chronicles the life of Ofelia and her group of friends, who after the death of Aunt Susan, her niece Ophelia became heir of the old house, where they move provided care for the aunt’s pet, Becker a black cat; Days after the cat died mysteriously appears in the basement and strange things start happening in the house.