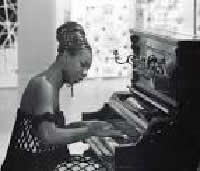 Freezing Hot, the second humorous monologue by comedian Iliza Shlesinger a continuation of his acclaimed “War Paint” is one of his premieres. This title joins the list of original monologues of Netflix, which already counts among its protagonists with Chelsea Handler, Russell Peters, Aziz Ansari, Jim Jefferies, Chelsea Peretti and Bill Burr.
The program will be available from Friday January 23, 2015 and from the stage of the Gothic Theatre in Denver, Colorado, Shlesinger will expose his honest and fearless perspective about the struggles between men and women.
Also, in 2015 will premier “What Happened, Miss Simone?” A documentary about the life of pianist Nina Simone from child prodigy to the iconic singer and passionate activist, told in her own words. Produced by Netflix and RadicalMedia and directed by Liz Garbus, the special weaves unreleased recordings and photo file in conjunction with the most memorable songs of Simone.
“The documentary shows a bold and provocative image of Nina Simone and we are proud to bring our members around the world this type of content,” said Lisa Nishimura, Vice President of Programming of original documentaries at Netflix.
Meanwhile, Liz Garbus added that “I am very excited that Netflix has taken up this incredible story of Nina Simone and has partnered with RadicalMedia for this project.” For each of her millions of fans, Nina is like a precious secret. With this documentary we will show her passion, her music and her story to the world.”
Finally Justin Wilkes, president of Media and Entertainment @ RadicalMedia and one of the producers of the documentary, concluded: “Throughout her life, Nina used her powerful voice to entertain the audience, make a change and inspire all those who have heard some of her songs. It is more than appropiate that Nina use her voice once more to enchant a new generation of fans by taking the lead role in telling her own story. ”