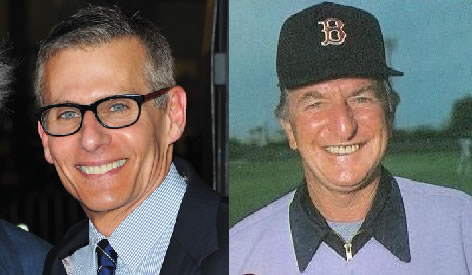 Michael Lombardo director of programming for HBO and the creator, screenwriter and producer John McNamara

Action, drama and comedy is what will top the small screens this 2015. The plots that trap audiences will be a la carte not only on TV but in OTT offers.

Better Call Saul. Arrives on February 9 this highly anticipated spin off of “Breaking Bad” starring Saul Goodman (Bob Odenkirky), aims to fill the void left by the series that swept the awards in recent years. “It’s an absolute drama, drama 85%, 15% comedy,” affirms the actor Bob Odenkirk, who plays Goodman, according to statements which reproduced several newspapers and magazines. Now this character who lived in the shadow of Walter White (Bryan Cranston) will become the protagonist of the story created by Vince Gilligan.

Westworld. Based on the work of Michael Crichton (“ER,” “Jurassic Park”), this story, which had its film adaptation in 1973, will be brought to the small screen on HBO. The science fiction series created by Jonah Nolan, Lisa Joy and JJ Abrams take the viewer to a futuristic theme park inhabited by robots that are alien to their automata status. With titans in the cast, as Anthony Hopkins and Ed Harris, the project will also include the services of James Marsden and Evan Rachel Wood.

Daredevil. It will be the next May when fans of superheroes can enjoy the first series arising from the agreement between Marvel and Netflix. After a film adaptation that was severely criticized by fans of the alter ego of Matt Murdock. The story returns with Charlie Cox as the protagonist. With 13 episodes, the serial will have as villain Vincent D’Onofrio, who will play the king of crime Kingpin.

True Detective. With Matthew McConaghey one of the better series that HBO has delivered in recent years. A smart script, great performances and exquisite music that make up the series recounted the pursuit of a serial murderer by agents “Rust” Cohle and Martin Hart. It will feature performances by Colin Farrell, Vince Vaughn, Taylor Kitsch and Rachel McAdams. Now, the crime will move from Louisiana to California. “The script is better than last season,” promised Michael Lombardo, director of programming for HBO, acording to several published print media.

Battle Creek. The creator of “Breaking Bad,” Vince Gilligan, returns in this TV drama. The series will focus on the lives of two cynical detectives who must fight crime on the streets of Battle Creek, and trying to reconcile differences between their opposite way of seeing life. Premiering on March 1 by CBS, starring Josh Duhamel, Dean Winters and Janet McTeer.

Aquarius. The police plots are a guarantee. This explains why several series with this issue have prime times on television. Now it was the turn of David Duchovny, who gets into the skin of Sam Hodiak a police sergeant who must investigate the disappearance of the daughter of a prominent lawyer. Set in the 60s, the NBC series, created by John McNamara addresses one of the most exciting stories of criminology of the last century: the acts of mass murderer Charles Manson. The program will debut next March.