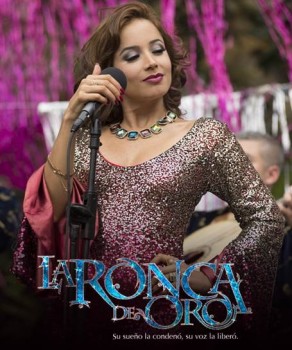 Since last December 23, the hit series La Ronca de Oro (62x1h), produced by CMO for Caracol Television and distributed by Caracol TV Internacional arrived to the African continent, dubbed into English, by the pay channel signal Star Novelas, with a frequency from Monday to Friday at 7:30 pm.

With the presentation of two chapters the day of the Premiere, viewers began to enjoy this series inspired by the events that marked the life one of the most beloved artists of Latin America: Helenita Vargas, a brave, cheerful woman with a powerful voice, who defied her family and high society of the time, which wasn’t prepared to receive a female singer of rancheras.

A magnificent production with high aesthetic values, elaborate costume details, makeup and locations, to recreate the 50’s and 70’s, decades where the story of this courageous woman in two stages is developed: the first deals with life as a teenager and second, shows the consolidation and success of this singer, becoming one of the most beloved artists in her country.

Recorded entirely in exteriors, has Ana María Estupiñán and Majida Issa as responsible for interpreting Helenita Vargas in her youth and adult stage respectively; the rest of the cast is comprised of recognized actors as: Laura Garcia, Leonardo Acosta, Diego Cadavid, Luis Fernando Montoya, among others.