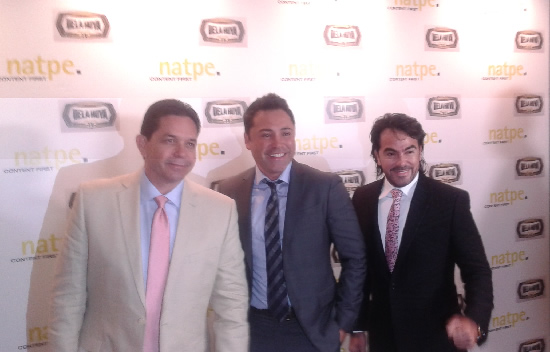 The event was installed by Rod Perth alongside Jordan Levin, CEO of NATPE and confirmed that NATPE 2016 will be held again in Miami.

The first day, yesterday proceeded with events, announcements, releases of recognized companies and innovative proposals for former employees of large groups, now independently, offering a much more interesting univese than those offered by the groups for which they worked for. We are talking mainly about the North and Latin American market.

The first day ended with an evening hosted by Cisneros Media in the pool area of the Fountainebleau Hotel where the event takes place, in which attendees enjoyed a magic show, good food and variety of drinks including wine, champagne and beer.

In the morning the celebration of 50 years of Globo with a great summons gave way to Telemundo, with an innovative presentation at a luncheon in which the production ‘Dueños del paraíso’, the first co-production between Telemundo and National Television of Chile -TVN, was showcased.

TVMAS will continue reporting on this important market with video interviews, news and updates.