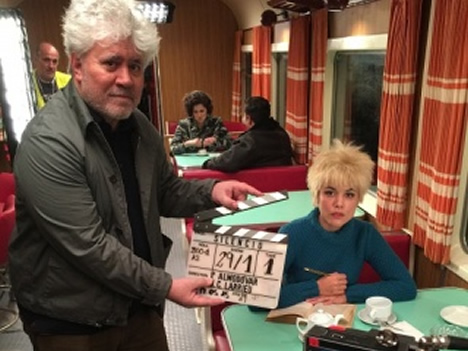 Almodovar, a photo posted on Twitter by his brother Agustín Almodóvarr

It is a photo taken in a train car, and actors Daniel Grao and Adriana Ugarte, with the wig blonde-; Is the first image of the filming and sees Pedro Almodóvar posing with the clapperboard.

Filming began early last May and has as locations in Madrid, the Galician Rías Altas, the Sierra de Huelva or the Aragonese Pyrenees, according to the production company El Deseo owned by Almodóvar in a press release.

The story is loicated in 1985 and runs to the present, and speaks on topics as destination, the guilt complex or abandonment.