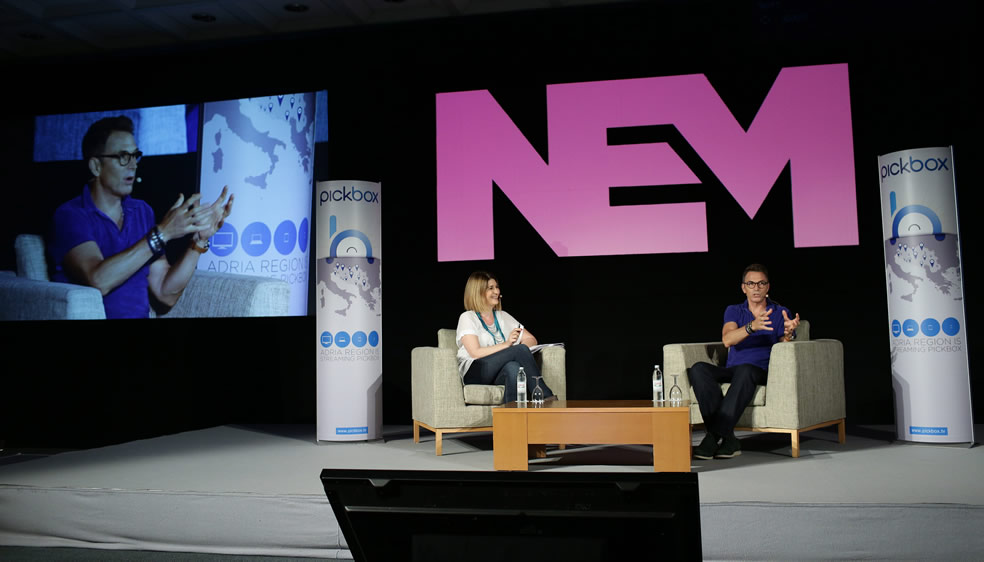 The second day of the NEM was marked by filled events, from excellent panels, sunny Coffee Breaks and Happy Hours. After the lunch break came an interview with Tim Daly, the main actor in “Madam Secretary”, and it was organized by Pickbox.

The second day of this year’s NEM started with a salutation from Apostolos Triantafyllou, a senior CEE and Central Asia sales vice-president in Eutelsat, a leading satellite operator. During his speech Triantafyllou described an Eastern Europe region as one of the more dynamic markets in the world where trends are followed actively, which NEM also proves.

The first panel followed after the salutations, named “How do the public and commercial televisions fight the economic crisis?”, which was moderated by Scott Roxborough, European editor of The Hollywood Reporter news. Main speakers on the panel were Henning Tewes (chairman of the board of RTL Croatia), Pete Smith (director of the Greek Antenna International) and Pavel Stanchev (director of BTV Media Group, Bulgaria). The focus of the panel was on the analysis of the market with regards to the economic crisis that Croatia, Greece and Bulgaria experienced.

After the lunch break came an interview with Tim Daly, the main actor in “Madam Secretary”, and it was organized by Pickbox. Antonija Mandić spent a pleasant half an hour talking to Daly, where they briefly covered all the segments of his life. Daly pointed out that he is politically very engaged because he thinks that it is a duty of every person for whose freedom and a right to vote others fought. Daly mentioned that he noticed, in his role as Henry McCord, a husband of the secretary of the state in “Madam Secretary”, many similarities with the main character, and as the most important he mentioned a moral compass which is very important in life. Daly told that he is currently in the happiest times of his life where he is very satisfied with his job and his family. The star promised to return to the fascinating Dubrovnik.Between the panels, the sponsors had an opportunity to offer all the participants coffee or cocktails, and so MTG, EUTELSAT and Deutsche Welle helped to refresh the participants of the second day of the NEM 2015 with complimentary gifts and beverages. To close the evening with a lively cocktail in the outdoors of the Dubrovnik Palace Hotel, venue of the event, in an imposing rocky beach on the beautiful scenery of the Adriatic Sea.