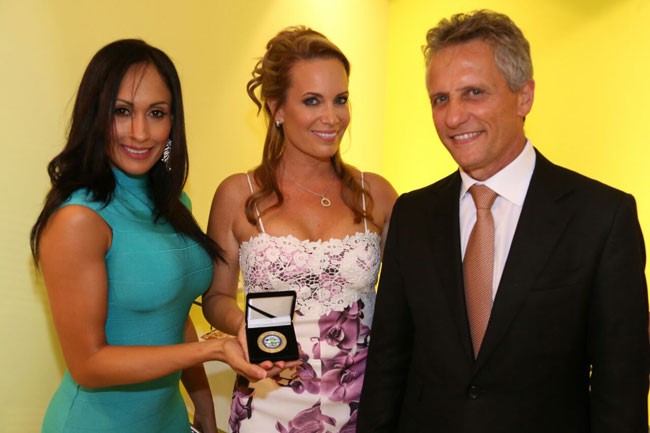 On July 28 presenter Natalia Denegri, presenter and producer Nelson Bustamante and publicist and producer Elizabeth Hernandez, received recognition from the Mayor of the City of Doral, in Miami, Luigi Boria for the documentary DOBLE EXILIO (DOUBLE EXILE) Part 2.

This documentary has been widely accepted is produced by Nelson Bustamante and Elizabeth Hernandez, led by Natalia Denegri and it was nominated for this year’s EMMY.

DOBLE EXILIO, a program with compelling stories of Cubans who had to immigrate twice for the same reason. Denegri gave herself the task, of investigating to bring to the audience three cases of Cubans who emigrated from Cuba to Venezuela and then to the United States, fleeing the dictatorships in those countries.

In this second part Denegri recounts the current situation of Venezuela reason whereby the number of Cubans and Venezuelans who abandon Venezuela every day, is alarming.

The delivery took place at the cocktail of CONNECTIONS magazine cover offered by its Director Pancho Tosta, which precisely Natalia Denegri is the cover of its latest issue, the headline: “Daring Solidarity and Journalism,” accompanied by a photo shoot by Enrique Tubio and artistic image of Migue Fernandez. With this cover Denegri celebrates her latest achievements.