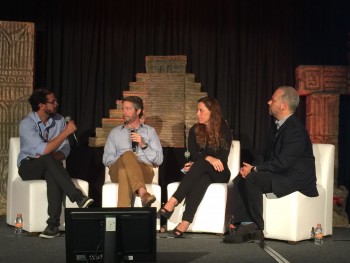 On Thursday at MIPCancún, the “Managing the digital revolution” Summit took place, with the participation of different executives of traditional media and digital platforms, who analyzed the consumption of content in the different media.

With the participation of executives of traditional media and digital platforms, the consumption of content in the different media was analyzed. Eduardo Hauser of Scripps Networks; Luis Daniel Capriles, of Newflix; Laura Tapias, from Applicaster; moderated by Rodrigo Ros.

The conclusions of Farid Ben Amor of the Fusion channel and Jennifer Perri of Univision was “we must have presence everywhere and be aggressive because every loss of half a point in penetration of pay TV, represents millions of dollars less In billing. And, it’s not just a task for digital platforms, studios and content producers should be concerned about this migration.”

Laura Tapias, from Applicaster, Eduardo Hauser from Scripps Networks, and Luis Capriles from Newflix concluded the dialogue, tinted with videos. ‘You have to create engagement with mobile devices from what is being seen on the television screen; what we try to do is entertain them with the same things on the devices, we have to create a digital script. Capriles concluded that the content is becoming shorter and more and more unique for each platform, audiences are more specific, scopes are different.