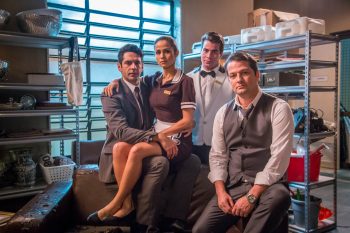 Globo will be located in the Trésor Tower, suite 1701, during Natpe, which will be held from January 16th until 18th, in Miami Beach. The Brazilian company that produce, distribute and exhibit multigenre content around the world to many platforms, will offer its traditional Screening Breakfast on the morning of the 16th (from 8:00 to 10:00 AM, in the Versailles Tower, at the Glimmer Ballroom), where it will launch its new catalog of unreleased titles.

The clumsy millionaire robbery of a luxury hotel in Rio de Janeiro and its unfolding events are the starting point of ‘The Big Catch’. This laid-back and funny crime story reached a daily average of 38.6 million viewers in Brazil. It’s last episode aired in Brazil on Monday, January 8th, reached 45.2 million people and a 55% share. With lots of action scenes, ‘The Big Catch’ discusses ethical and moral values through a light and high-spirited approach. Globo will release the fast-paced and contemporary telenovela during NATPE 2018, and it will definitely be a success in the international market.

‘The Big Catch’ is also being aired in Portugal, on Globo’s basic Pay TV channel, luring in more than 100,000 viewers every day.

The star-studded cast makes sure the plot has lots of action and plenty of good laughs: Marcelo Serrado (‘Looks & Essence’), Nanda Costa (‘Brave Woman’), Irene Ravache (‘Passione’) and Elizabeth Savalla (‘Trail of Lies’), among others