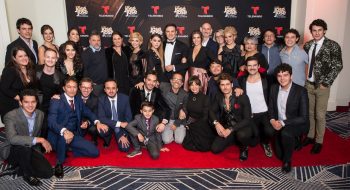 José José, who could not be present, shared an emotional message through his friend Jorge Jimenez, who is also part of the cast and executive producer of the series: “Today I do not want to taste my pain. Today I want to celebrate my audience and with tears in my eyes for all the affection they have given me and continue giving. Today with my heart in my hand, I give my story. Accompany me on this journey through my life, for the life of a human being like you and like many others.”

Based on the story of José José, the best-selling artist in the history of Mexican music, the authorized series will give viewers full access to the melodious, and sometimes stormy, musical icon’s life.