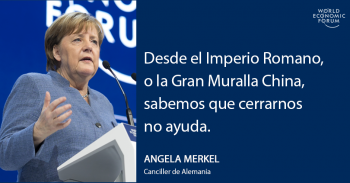 On the business meeting in Davos, Switzerland, the World Economic Forum (WEF) published the Inclusive Development Index 2018. There, Argentina was overshadowed in 52nd place out of 103 countries. Uruguay, Chile, Peru and Paraguay are better located.

The ranking estimates the level of development of the countries from a multidimensional approach that transcends economic growth. The table of countries is divided between 29 developed economies and 74 emerging economies.

Thousands of the richest and most powerful people in the world meet in Davos. Why do they flock en masse to a sleepy village in the Swiss mountains?

This forum is a public-private and non-profit collaborative organization that brings together the main leaders of international organizations, leaders of

several countries, leader of companies and people of reputed prestige worldwide to analyze the direction of the planet.

Angela Merkel said in her speech that “we need global cooperation, not walls.” And stressed the importance of multilateralism and warned that we have not learned from the darkest days in history.

“Have we really learned the lessons of history? We have not really done that,” said during the plenary session in Davos. “The spirit of multilateralism that rebuilt Europe and formed our international institutions after World War II is now under threat,” she said.

“We see increasing populism, we see a polarizing atmosphere,” she said. When addressing challenges such as migration, the foreign minister called for cooperation, not isolation. “From the Roman Empire, or the Great Wall of China, we know that shutting us down does not help protect our borders, we also need good cooperation with our neighbors, we need good agreements, valid agreements, that are respected.”

The digital economy was another important issue in her speech. The eurozone’s largest economy, which currently enjoys strong growth and record unemployment, said it should respond to the long-term challenges of the great digital shift.

“Data will be the raw material of the 21st century”, and bring with it complex challenges, from economic inclusion to privacy. The EU will evolve towards a “common digital market”.