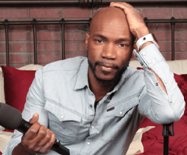 Ian Edwards is a stand-up comedian whose topical and culturally relevant content can be heard on the Joe Rogan Experience podcast and The Adam Carolla Show podcast. He was a co-producer on HBO’s Crashing and Co-Producer on Netflix’s Friends From College on which he also played ‘Skull.’  Edwards wrote the successful UnderCover Brother 2 for Universal and Netflix.

He has written for hit comedies such ABC’s Black-ish, NBC’s The Carmichael Show, and CBS’ Two Broke Girls. Ian’s comedy debut, 100% Half Assed, was released under Conan O’Brien’s Team Coco Records. He is a regular on Conan and, previously, @midnight. Other successes include widely popular Tangerine which premiered at Sundance in 2015. Most recently, he can be seen on Comedy Central’s The New Negroes with Baron Vaughn and Open Mike Eagle.